PRA Elmer Committee
K0EKA Tech Note #4
Satellite Communications
If you need help with any items described here, ask an Elmer at the monthly PRA Elmer tech night!
I have been involved with AMSAT and amateur satellites since the formation of AMSAT in 1970. I think I was a regular member for a while and then AMSAT offered life memberships for $50. I am life member # 185.
One of the first satellites I worked was Oscar 6. It was flying in an airplane for a test, and the plane and Jan King flew over Kokomo, Indiana where I was with an early group of AMSAT hams trying it out before launch. See photos below: 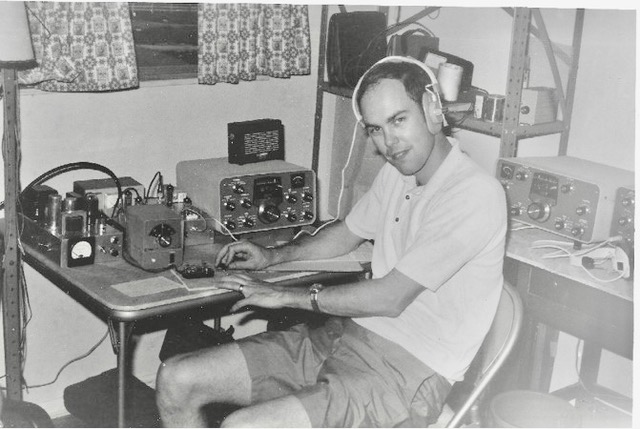 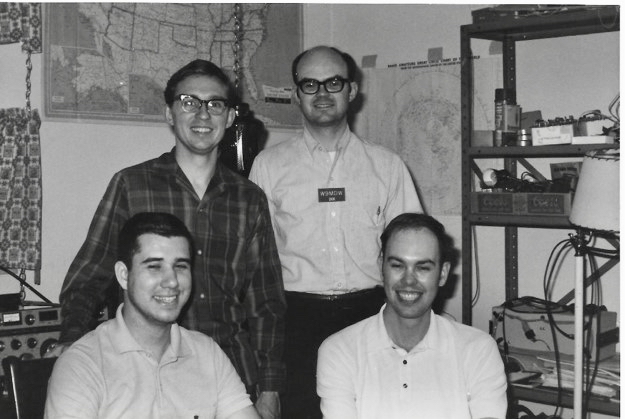 K0EKA Ron                                                     KO Learner SK, Phil, KD4S Dick McClain, and K0EKA Ron
I and KO Learner, went out to Baltimore, MD, John Hopkins University, for the first annual AMSAT meeting in about 1971. I also went to Orlando, Florida to see AMSAT Oscar 13 being tested, and to the annual meeting years ago.
I really did’t get serious about Amateur Satellites until 1990 when I moved back to Kokomo from Santa Ynez, California. In California I saw the first cube sats launched and I wrote and used telemetry decoding software (The first and last C language program I ever wrote) for AO-16.
My brother, Roger Cox, W8IO, had just designed Hi-Gain’s Satellite pair with switchable polarization. We made a deal, Roger would ship me his prototype antennas, and I would give him a two wheel tent camper I was no longer using. DEAL!
I had 50 feet of one inch Andrews coax from the Dayton Hamvention, and a new home (to us) being renovated outside Kokomo, Indiana, the home of Delco Electronics, a Subsidiary of GM Hughes Electronics at the time.
So we made a basement room into a ham shack and carved a tunnel out from the ham shack to a basket ball post in cement about 25 feet from the shack. I installed two runs of the one inch coax and placed a Yaezu AZ/EL rotor on the top with Roger’s Hi-Gain Sat antennas pointing to the sky. AO13 was still functioning for a while then, and I made some great QSOs through it.
Current Satellite comunications set up at my rented patio home in Aruora, Colorado:
1. Best satellite tracking program ever written for Hams is Macdoppler (I think); and I have tried most of them over the years. Trouble is that it runs on a Mac!
No problem, it has a broadcast feature that puts the tracking data on your LAN, and the rotor has software that uses this data, and it all works!
2. My rotor is a Polish designed and built rotor called an Alpha-Spid AZ/EL, very rugged and with worm gear drives, it has grad stability in high Colorado winds.
3. My rotor controller is the Green Heron AZ/EL controller made for the specific rotor above.
4. My antennas now are the M2 LEO set with ARR antenna mounted preamps hard switched by the external preamp power supplies provided by the IC-9700 antenna coax jacks.
5. Sat rig is the IC-9700.
Hope this might spark some ideas!
Ron Cox K0EKA
3/23/2020