PRA Elmer Committee
K0EKA Tech Note #3 Rev A
High Performance Software Defined Radios (HPSDR)
If you need help with any items described here, ask an Elmer at the monthly PRA Elmer tech night!
I have been working with the HPSDR/TAPR group since they were first formed back in the early 2000’s. My call was W9KFB, and you may see that call on the open HPSDR web site still today. I purchased and assembled several HPSDR transceivers building them with a back plane called the Atlas, a receiver called Mercury, and a transmitter called Pennylane. There were a few other boards involved and it was an expensive, but educational hobby.  I tried to sell them on e-Bay, but could not even break even due to the high cost of the components. Things got a lot better when the group finally designed a single board version called Hermes with all the functions and features of the previous multiboard system on one very complex multilayer circuit board.
The software was derived from the Flex Radio’s open software set, PowerSDR and it is still the root of the software used today, although much advanced.
After the first batch of Hermes boards were built by the Tuscon Amateur Packet Radio Club in Arizona, a company in India, Apache Labs, built a filter/amplifier board for the Hermes board and put both boards in a nice case. They called it an "Apache Labs ANAN-10”. Apache Labs now sells many varieties of HPSDRs with the top of the line now costing thousands of dollars, and capable of 200 watts output. You can find them on-line or in the HRO catalog.
I still love my little ANAN-10 which puts out a nominal 10 Watts on 160 through 6 meters and depends on a fast i7 Intel based computer running 1,000 Mhz eithernet or wireless to control it. The latest software is now called Thetis, and after using it all these years and seeing it evolve in to great USA designed software, it is very good. An equal or better than what is included in the off-the-shelf SDR rigs like the IC-7610 or IC-7300 (I also own an IC-7610 and IC9700). My laptop is a slow i5, so I can’t use the current laptop with it without a lot of software application and firmware changes.
Flex Radio abandoned the PowerSDR software due to many issues, but it has lived on in the Open HPSDR community and works great in all of the new Apache Lab gear as well as my old ANAN-10. If you get a new Apache Lab rig, they will tell you what software to use and I won’t go there. But if you can pick up a used Hermes board based rig like the ANAN-10, here are some notes that will help you get started:
1. If you have a slow computer, use protocol 1 on the eithernet connection. Protocol 1 runs at 1 MHz and the older computers just can’t handle the faster protocol 2.
2. The software for the rig is hosted on Github now under TAPR's library. Use the latest PowerSDR software for Protocol 1 firmware installed on your Hermes board,  or Thetis for Protocol 2 firmware. If you have an i7 or better PC processor, you will want to use the Thetis software.
3. When you first execute either software package there is a long delay getting to the first screen while the computer executes building up a library of Fast Fourier Transforms. This can take up to 30 min even on a new fast i7 processor. Also the Hermes Board ip address has to be in the correct range for the computer to find it. There is software available to change the ip address but it is a hassle to use.
4. This software is made to interface with virtual com ports and virtual audio connections within the same computer as the rig uses. I use Com0Com, and Voice Meeter Banana software (both free) for these connections to WSJT-X and Ham Radio Deluxe software. The software packages have many virtual ports to use for logger programs etc…
5. Both software programs have implemented predistortion control of the transmitted waveform so that your IMD numbers are much improved on digital modes such as FT-8. It uses a low level sample of the amplified transmitted waveform, stores the corrections, and then pre-distorts the transmitted waveform so that it comes out of the amplifier without the amplifier’s distortion. If you understand that, I have a bridge I would like to sell you, Hi.
I hope this might give you some new ideas!
Here is a screen shot of my current Thetis software on 20 meters: 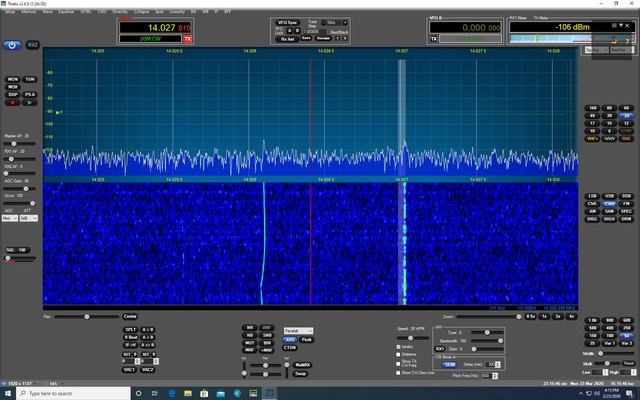